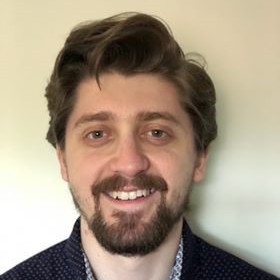 Veteran's Journey from Bucks to Princeton

Throughout his life, Mason City, Iowa native Lane Bryant '20 always had an interest in computing.

"I worked with friends to tinker with hardware, mess with scripts, and play video games while trying to discern the inner workings of the software. However, I didn’t think that I wanted to pursue higher education, even in a computing field. After graduating high school, I opted to join the Marine Corps to explore my interests."

After his time in the Marines, Lane decided he wanted to take his interest in computing to the next level. He began researching community colleges, specifically because he felt that they were more accepting of non-traditional students like him. That's when he found Bucks.

"I sent my admission application to Bucks in Spring 2018 and I was lucky enough to start attending remotely the same year. I was immediately clicking with the professors and the coursework, and this was shown through my grades. For the first time ever, I was maintaining a high GPA. I can’t help but think that this was thanks to the amazing faculty and staff."

During his Fall 2019 semester, Lane started thinking about his transfer options. Despite his lack of enthusiasm about academia in high school, he had always dreamt of attending a top university. Lane's success at Bucks allowed him to be a competitive applicant at Ivy League schools, and during his final semester at Bucks, his dream was realized.

"Thanks to the hard work I put in and my professors at Bucks, I was one of only 13 transfer students accepted to @Princeton in 2020."

Lane is now finishing up his first semester at Princeton, and plans to officially declare his computer science major this spring.

"The professors [at Bucks] provided me with the right experience, and while I’m looking forward to my time at Princeton, I’ll never forget what Bucks has done for me."