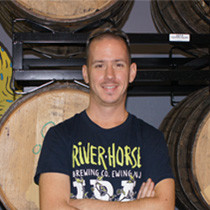 Alum Brews Interest in his Craft

On the staff page of the River Horse Brewery website, you'll find Warehouse Manager Brad Quinnan, a native of Newtown Grant and graduate of Bucks County Community College's Class of 2016. Born and raised near the Newtown campus, Quinnan enrolled after graduating from Council Rock North High School. With no idea what he wanted to do for a living in the long term, he took a few classes then stopped temporarily while he worked a series of local jobs in an effort to figure it out.

One job included the popular Newtown pub restaurant, Isaac Newton's. That's where Quinnan grew a keen interest in craft beer brewing. At the time, he was not yet of legal age to drink in Pennsylvania, but he learned that it would be legal for him to brew beer at home.* He found supplies at a home brew shop and began to try his hand at the craft.

At Isaac Newton's, Quinnan said, he'd often talk the ear off of his co-workers and Chris, the Sunday bartender about craft brewing. Chris worked full-time at the River Horse Brewery which at the time was located in Lambertville, New Jersey. "He was a big influence and taught me a whole lot about the beer industry in general."

In early 2012 when a job opened up, Chris asked Quinnan if he'd be interested in brewery work. He applied and was hired at an entry-level position where he could learn more about the brewing business. This gave Quinnan the stability of a job located just 15 minutes from his home which also fed his interest. The opportunity got him thinking about going back to school to earn his degree.

"Bucks made it easy and convenient to my schedule," he said.

Quinnan majored in Liberal Arts, earning an associate's degree. One class that stands out in his mind today is the public speaking class, a core requirement for most tracks. "I was a shy kid and never really liked to be outgoing when I was younger, but the professor made public speaking a lot of fun. It helped me to come out and be more outgoing and talkative, to just roll with it when you're talking to people," he said.

After a few years working at River Horse Brewery, Quinnan now holds the warehouse management position where he oversees a whole production staff. That public speaking class helped him to avoid being nervous when providing direction and set him up for a role now that is, as he tells it, "not so much brewing, but warehouse managing of the production staff, tracking inventories, ordering materials, and setting up all of the incoming and outgoing logistics."

"I never thought I'd enjoy forecasting needs. I like that about my job, that it doesn't limit my job to just brewing and the skills I'm learning are transferable," he said.

With his nearly seven years working for River Horse Brewery, Quinnan enjoys getting out to the public facing brew fests in Pennsylvania, New Jersey and New York including: Brew Fest River Horse, the Newtown Beer Fest, and the Washington Crossing Brew Fest. He looks forward to returning to his alma mater for the winter's upcoming First Annual Bucks Brewfest 101.

*According to the American Homebrewers Association, which cites the comparably higher cost, conspicuousness of the setup required, and the length of time (usually measured in weeks) to produce a single batch of beer, home brewing is unlikely to contribute to underage drinking.