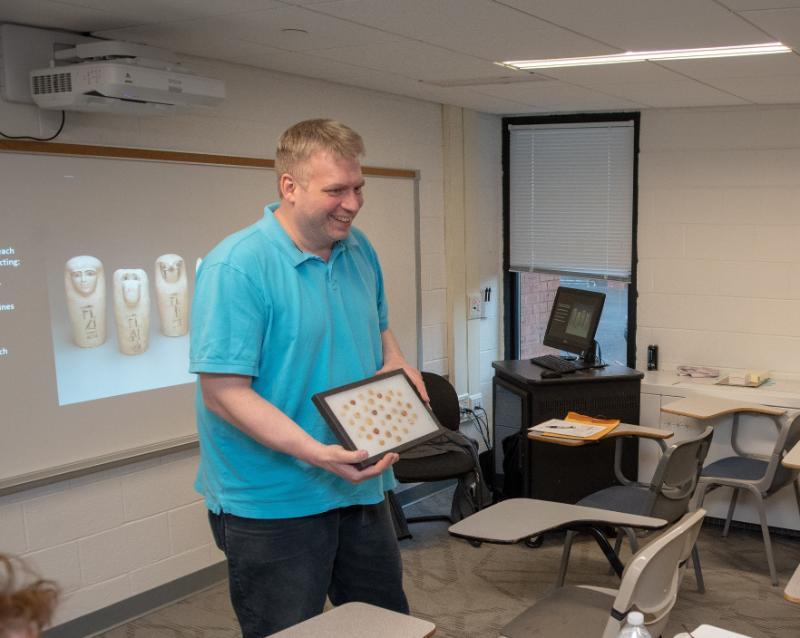 We are now offering Live online classes for you to explore new hobbies & projects, ancient peoples, tales of the past, and insights of the future.

The Beatles’ music communicates to people, it touches them, it is fun and light-hearted, it is serious and cynical, it is frightening and dark; it embraces many preceding genres of music and spins them afresh. Most know the Beatles’ hits but few know their story. We’ll delve into the rich personalities of a driven but conflicted John, an eager-to-please but private Paul, a money-concerned turned spiritual George and the abrupt late addition Richy (aka Ringo), the emulsifier of the band. We’ll discuss how they met as teenagers, how they matured both musically and personally, and how they defined and reflected their time. Finally, we’ll discuss the factors that led to their break-up. “The deeper you go, the higher you fly. So come on!”

Scott is a passionate Beatles fan since nine years old, having received the Meet the Beatles album as a gift. His interest in their music and each Beatles’ individual charm and unique personality led him to deep exploration of the Beatles’ story via books, seminars and classes.  He has traveled extensively to Beatle sites including (but not limited to) Liverpool, Hamburg and London (including interviewing Roag Best, the son of the Beatles’ road manager and half-brother to the Beatles first drummer) to gain a better knowledge of their collective and individual stories.  Furthermore, Scott has collected over 50 hours of rare interviews, press conferences, outtakes, studio banter, concerts and alternate song takes.   Scott is a recently retired sales executive of 35 years with experience at Amazon Web Services, IBM and other technology companies.

We’re ready to get back to our travels! When it is safe to go on a trip, where can we go, how do we stay safe, and how do we make our travel free? If you are near retirement, changing careers, a student, or someone who likes the idea of making additional income to support your travel dream, this class is for you. World traveler Gina Henry shows you how she is prepared for the new “travel normal” including important tips on safety, trip insurance, what to do if you become sick, and other strategies. Discover over 200 ways to travel free. Earn free airline tickets, hotel nights, tours & more in the USA & worldwide! Volunteering, fun work-vacations, paid travel, teaching English and remote employment opportunities. Tuition includes Gina’s 100-page eBook How to Travel Free & Safely (retail value$39.95).

GINA HENRY has lived this travel life for 30 years, taking 10 free vacations a year by using free airline tickets, hotels, cruises, tours, meals, & more. She has traveled to 98 countries and all 50 states. She teaches in 90 cities and is the author of many travel books & audios. She leads several group tours each year and organizes a volunteer teach English program in Thailand and Peru.

Want to learn some new discoveries? The science of human origins seemingly changes from year to year; wide held theories can be overturned with a single fortuitous discovery. We’ll look at the last five years of new and paradigm shaking discoveries and explore their impact on how we understand ourselves.

Matt Bielecki is an archaeologist, historian and researcher, with archaeological experience in all stages of fieldwork, laboratory work, and technical report production encompassing the Mid-Atlantic region. Matt graduated with a BA from Pennsylvania State University, and a MA from Monmouth University. He is a member of the Lambda Alpha National Anthropology Honor Society and has presented at regional archaeological conferences. Matt’s research interests include: stone tool identification and examination with a focus on microwear analysis.

Want to learn how Andrew Jackson rose from an orphan, to war hero, to the seventh president of the United States? Andrew Jackson came to embody the “Era of the Common Man,” this era saw reform movements ranging from temperance, education, prison reform, the abolition of slavery, and women’s rights. This course will also examine the reforms of the period and movements some of which lasted to the 20th century.

Martin Scorsese is considered by many to be the greatest living American filmmaker. From Mean Streets to Running Bull to The Departed, every film is a fascinating distillation of film history as well as personal journey for Scorsese. We’ll delve into the technical side of his masterful filmmaking, as well as the themes and messages contained within every movie.

The Experience of Poetry: Adventures in Verse RCEGN 8839 C01

Poetry is not for the faint of heart. In this course, you will learn how to read the experiences that the poets seek to convey by exploring the classic poems of the western tradition. You will learn to understand the tools poets use: Meter, Rhyme, and Form. Its favorite themes include those things that have most deeply impacted the collective human soul throughout history: war, love, death, sex, identity, poverty, nature, prejudice, and more. Poetry is the language of experience. Poems are soulspeech-- words that speak not to one’s mind, but to their soul. We will spend a portion of each session reading and discussing the poems that form the canon of the western poetical tradition.

As we dive deeper into American Sign Language, students will be expected to participate in class lecture as well as in-class activities with growing emphasis on receptive and expressive ASL skills. Upon completion of this course, students will be more comfortable and confident in their ASL conversational skills, as well as gain a deeper understanding of the Deaf community.

Prerequisite: Sign Language I or a prior ASL class.

Originating in China, Mah Jongg is an exciting and engaging game using tiles to form hands, much like rummy. Learn to play the American version using the National Mah Jongg League rules and card. An experienced educator will explain the basics in simple terms and guide you as you learn.

You will gain the knowledge to put together a space you will love on a budget you can afford. From paint to accessories, learn the 7 layers of design that the pros use to create a dream makeover. Whether you are starting with an empty room or looking to refresh an outdated look, this class will walk you through coordinating colors, textures and styles. We will address flooring, furniture, lighting and accessories as well. Struggle with selecting paint? Paint options will be a strong focus as it is the foundation of the design palette. Learn how to deal with open floor plans and those obstacles you can’t afford to rip out yet! Learn where to shop for budget friendly finds and how to DIY some popular design trends.