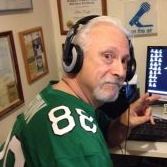 Whether you are 77 or 17, if you live anywhere around Philadelphia, you might recall having heard the voice of Shadow Traffic's John Brown on your car radio. But you may not know that back in the 70s, John Brown honed his craft at Bucks County Community College.

Brown was bitten by the broadcast bug as a young teen. Born with cerebral palsy, he endured many doctor visits and hospital stays as he grew. While recovering at Schreiner's Hospital for Children, he learned that the hospital had a small radio station run by "the kids."

"For an hour a day, over lunchtime, we would play records for everybody to listen to," over the in-house system. One time, a photographer from one of the Philadelphia newspapers came out to take a picture of the children broadcasting and printed it. Brown enjoyed the notoriety and his interest took hold. In high school, he'd often help DJ at the Wednesday night "canteens" (the dances.)

Right after graduation, Brown headed to Hollywood, California to the Career Academy for radio and TV broadcasting. Once graduated, he sent out audition tapes hoping to get a job in radio. He landed an interview at WBCB in Levittown, but Brown was told he needed the polish of more on-air experience, which "really bummed me out," he said.

His mother suggested he enroll in college. Brown admits he first thought about attending either Penn State or Temple, but neither was affordable. Someone suggested Bucks County Community College and after checking, he learned that it had a working radio station club, WTYL, so he enrolled.

"When I was there, the professors were excellent as I'm sure they are today. There's upward mobility and an incredible learning environment. I loved the campus. Especially behind Tyler Hall, it's gorgeous back there in the fall."

Majoring in journalism, Brown spent much of his spare time focused on working in the student-run radio station. "When I was there, the studio was a little broom closet in the student cafeteria, and we broadcast our entire schedule out of there," he said.

By the end of his first year as a day student at Bucks, Brown had become General Manager of the school's radio station. In his second year, the budget allowed for a new studio to be built at the base of the student union. It was then when he landed a position at Doylestown's WBUX, working middays from 10 a.m. to 3 p.m.

After work, he'd go home for dinner followed by night classes at Bucks, often until 10 p.m. For a while he held a security guard position too from midnight until 8 a.m. Eventually, the long hours caught up to him so Brown quit the security job and left Bucks to pursue his fledgling radio career.

John Brown not only achieved success in his radio career, winning Variety Club's Lifetime Achievement award, but he is also a four time winner of the March of Dimes Achievement in Radio ~ Philadelphia's Best Traffic Reporter. He went on to obtain a Bachelor's degree in Broadcast Meteorology netting him two wins as Philadelphia's Best Weather Reporter.

Asked what advice he'd give to his teenaged self given the opportunity to go to Bucks County Community College today, Brown enthusiastically replied, "Go because it's an excellent learning atmosphere, plus it's affordable. In today's economy, affordability is key."