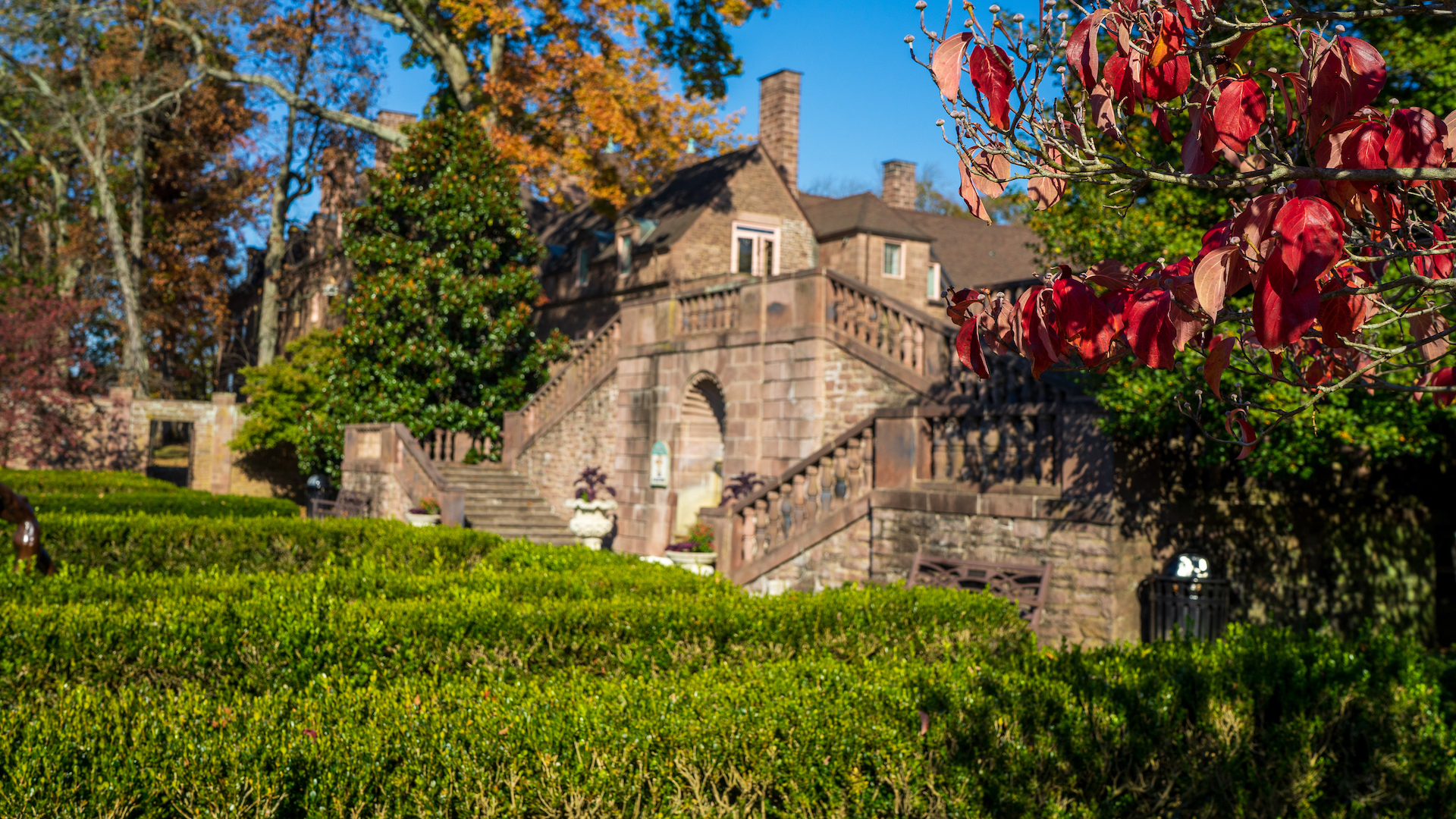 Perched on a hilltop overlooking Neshaminy Creek, the mansion and gardens still afford a view that “is one never to be forgotten,” as opined many years ago by Charles Willing of Willing, Sims & Talbutt—the prestigious Philadelphia architectural firm contracted to construct the Tylers’ mansion, service cottages, support buildings, and four-tier Italianate garden.

Indian Council Rock, which was the property‘s original name derived from a time when early Native American tribes counseled on an adjacent cliff had all the trademarks of a typical country estate during the early to mid-1900s: an impressive mansion, an outstanding collection of art and antiques, a thriving agricultural and dairy operation on extensive land holdings, and a formal terraced garden—complete with customary features of early twentieth-century horticulture.

The Tyler mansion is arguably the grandest home ever built in Bucks County and believed to be the last of the “great estates” ever constructed in the United States. In 1987, Tyler Hall (as the mansion is now known) and Tyler Formal Gardens were placed on the National Register of Historical Places.

By many measures, Tyler Hall and Tyler Formal Gardens are true gems of Bucks County, and their restoration and maintenance are important to the college as well as the community. Visiting this historic site is a step back in time to an era of elegance that included the Golden Age of American Gardens.

Indian Council Rock was originally purchased as a country retreat for the Tylers, who lived on Philadelphia’s Main Line at Georgian Terrace in Chestnut Hill. George Frederick Tyler (1883–1947), scion to a banking and investment family of Mayflower descendants, was a prominent banker, progressive farmer, and avid sportsman whose leisure activities included safari hunting, mountain climbing, and yacht sailing.

Throughout much of her life, Stella Elkins Tyler (1884–1963), the granddaughter of William L. Elkins (for whom Elkins Park, Pa., was named), was a strong supporter of the arts. She also was a late-blooming sculptor who studied under Boris Blai. Blai later became Dean of the Tyler Art School of Temple University, which was endowed by Stella Tyler. Her tapestries and statuary are still displayed in the mansion and gardens.

After World War I, the Tylers began purchasing a number of small farms in the Newtown area, including the Solly and Cooper farms, and eventually acquired close to 2,000 acres. The Tylers chose the location of their Bucks County home in 1928, and its construction began in 1930.

The 300-foot long mansion with 60 rooms, several towers, and a castellated balcony was designed in the French Norman revival style. The stone used for the exterior and much of the interior as flooring was taken from a quarry on the Tyler estate. The mansion’s outside walls are two feet thick and insulated with cork. Interior walls are equally strong and are also lined with cork, and in some cases, reinforced with steel rods.  The cobblestone courtyard was laid with stones transported from Callowhill Street in Philadelphia.

The floors are all reinforced with concrete, cork liners, and some are surfaced with rich wooden flooring. The roof consists of three overlapping layers of specially made tiles as well as copper rain gutters and downspouts.  All the window casements are steel and concrete and have individual locks, which required 90 different keys.

The mansion, which had more than 20 fireplaces, also had many elaborate features such as gold fixtures in every bathroom. In addition, the Tylers had a 10-car turntable garage, enabling each car to be cranked to its own spot.  Henry D. Slepper of Boston was hired to oversee the mansion’s interior decorating.  Forty servants staffed the Tyler residence in its heyday, and they lived either in the east wing of the house or in the small
cottages situated on the estate.

In 1932, the Tylers permanently moved to Indian Council Rock, and George Tyler established a stable of about 25 fine horses and restarted a dairy that had been abandoned in 1925. The new dairy was in operation for the next 40 years, and the Tylers had one of the leading Ayreshire herds in the country. The Tylers also raised grain, poultry, sheep, and pigs, and owned the Spring Garden Mill. In addition, the Tylers often purchased rare birds, exotic plants, flowers, and trees that had never previously been grown in Bucks County. Many species of wild fowl were bred at Indian Council Rock, and at one time, it was possible to find trees and flowers growing on the grounds that were found nowhere else in North America.

Upon George Tyler’s death, the Bucks County estate was bequeathed to his wife, who lived there until 1962 when she moved back to Chestnut Hill until her death one year later. Stella Tyler‘s will stipulated that 200 acres of her Newtown property, including the buildings, be donated to Temple University. The remainder of the property was sold to the Commonwealth of Pennsylvania to become Tyler State Park. On January 29, 1965, the Bucks County Authority acquired the 200-acre property from Temple for $700,000 for a proposed community college. On April 4, 1965, Dr. Charles E. Rollins became the first president of Bucks County Community College. Remodeling work on the mansion began in June 1965 and was completed in time for classes to begin on September 29, 1965.