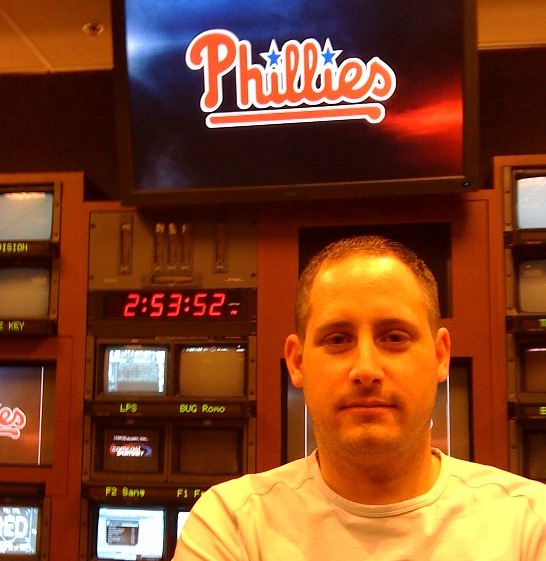 Bucks Alumnus Knocks it out of the Park

Attending an open house at Bucks County Community College with his mom back in '89 started one man on his path to becoming a television producer of Phillies Baseball for Comcast SportsNet.

Neshaminy High School graduate Jeff Halikman knew he wasn't set on going to a four-year school because, like many high school students, he wasn't really sure what he wanted to do with his life. The open house gave him the chance to learn more about Bucks' programs. "I walked up to the telecommunications department and talked to them."

Hearing what they had to say, Halikman decided to enroll. During his first semester at Bucks, he took a television production course taught by Professor Cara Schollenberger (now Cotellese).

"She really made telecommunications interesting to me. It got me going."

Cotellese helped him navigate his classes and later on transferring. "She was a great person to lean on for information, and at the same time was a great instructor. I learned so much from her classes."

Living just 10 minutes from campus, Halikman was able to work, attend school and put a little money away. "To me, it was very comforting and felt a little closer-knit than a bigger school."

Halikman prepared to transfer. "Looking back, I think some of my hardest classes were at Bucks, but I felt like I was getting my education and that I was putting myself in a better position."

"I felt like I was taking the right steps to build up to where I was going. Everybody at Bucks was very helpful because they know you are trying to transfer and they want you to." It was clear to him that the people at Bucks wanted to ensure that as many courses as possible would transfer to his destination school.

"It was a huge advantage. I always felt like I'd hit the ground running; that I was prepared when I left Bucks," he added.

During his senior year at Kutztown University, Halikman interned at PRISM Sports, a predecessor to Comcast SportsNet. After earning a B.A. in Telecommunications, he continued working in the broadcasting business. He then completed a temporary position at ESPN and headed back to PRISM. Rising through the ranks there, Halikman migrated to Comcast SportsNet as a video editor. In April of 1998, he was offered and accepted a position as Associate Producer for the Philadelphia Phillies where today he is a Producer, preparing for his 18th season with the club.

Having grown up cheering for Philadelphia sports teams, Halikman said the cool part about what he does is that he gets to work in a field where he's also a fan. He travels a lot, especially during the season, but he is often able to do it with his wife and children, and he said, "I'm just as big a fan now as I was then."

In the offseason, Halikman produces college basketball freelance. It all started with a conversation at a Bucks Open House.