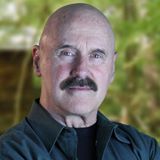 The path to higher education differs from person to person. Some people have the good fortune of support and resources, others the gifts of aptitude or ability that help them to more easily achieve their potential. Others, like veteran, actor and playwright Brian Delate, encounter obstacles that threaten to derail their dreams.

Delate did poorly as a Pennsbury High School student due in part to his reading problem though he did manage to graduate its class of 1967. His father encouraged him to attend a summer program offered at Rider University where, if he took three classes and achieved a “C” or better, he could become a full-time student and receive a draft deferment. “I didn’t even come close and I tried,” he said.

“The dean—he was very nice, but he said, ‘Son, you’re just not college material.’”

By the summer of 1968, Delate had been drafted to serve in Vietnam, but he volunteered for a 3-year enlistment in the U.S. Army. As a helicopter door gunner and other duties, he earned his way to Buck Sergeant through a series of increasingly dangerous posts.

In early 1970, while on a volunteer mission with the Green Berets at the Cambodian border, a failed attempt by the NVA to overrun the temporary base camp left Delate’s machine gunner low on ammunition. Under intense enemy fire, Delate retrieved the needed boxes of ammo; an action which earned him a Bronze Star for Meritorious Service.

After his year in Vietnam, Delate returned from the war to Fort Monmouth, New Jersey to complete his term of service after which he was honorably discharged. “I was not doing well. I was 20 and didn’t even know that I had been forever changed,” Delate said.

He had worked in the service with people who were college graduates but it didn’t seem to him they were a whole lot smarter than he.

Hadn’t he achieved much? And hadn’t he done excellent work?

Despite his successes as a soldier and although he wanted to go to school, he was scared. “Deep down, there was a part of me that thought I was stupid,” he said.

Though he had applied at other schools, with Delate’s reading difficulties, Bucks was the only school that would accept him. So, in June of 1971, he decided he had better prepare himself for the fall semester by taking a class to address his reading issues and a basic English grammar class as a refresher.

He enrolled in an experimental reading program that Dr. John D. Rosella (Professor Emeritus) had brought to Bucks from the University of Pennsylvania. “We took a test the first day and he asked me if I could stay after class for a few minutes.”

When the other students had all gone, the professor asked him if he knew where he stood reading-wise. “I said, ‘I know it’s bad. That’s why I’m taking the class.’”

The professor informed Delate that he’d only been reading at a fourth-grade level and inquired as to whether he read books.

“I said, ‘No. I mean, I read newspapers but not books really, and he said, ‘You’re going to be reading books by the time you’re done this class.’”

“That conversation really changed things radically. That gave me a confidence I didn’t even know I had. Thank God for Dr. Rosella.”

English professor Stan Heim (Professor Emeritus and 1980 Bucks County Poet Laureate) also had an impact. “He was tough but really committed to literature and American poetry.”

Heim, who also ran the Cultural Affairs Committee, invited Delate to join. “They had a poetry series in the east that was like second only to Harvard. They used to bring in these prominent American poets [and other writers]. One of the first was Isaac Asimov, the science fiction writer. I found myself involved and really enjoying a sense of purpose being a student.”

However, Delate had another obstacle: the required algebra class. Knowing he’d barely passed algebra in summer school at Pennsbury, he approached his advisor in hopes of finding an alternative but learned he had no choice. After just one algebra class, Delate explained to Mr. Kaplan, his mathematics professor, what a terrible math student he was having no vivid recall of material presented in class. Kaplan “turned out to be another angel among us,” he said.

Professor Kaplan told Delate not to give up and suggested he come by his office between classes. “It turns out I needed about 20 minutes after each class to reinforce everything,” Delate said.

Ultimately, Delate earned high marks in algebra and later in both trigonometry and analytic geometry. Declaring his first year at Bucks a success, he eyed pre-med and its calculus requirement. But Kaplan’s calculus class was already full and Delate didn’t want to take it with any other professor so he chose to wait, hoping for an opening in spring. Lacking math options for the fall semester, Delate registered for Acting 101.

“Believe me, I never thought I’d become an actor,” he said.

He thought acting class would be easy and fun.

Delate enjoyed the acting class but after a couple weeks, his professor, David Dean, took him aside after class and told him he should drop it because he would fail. Shocked, Delate learned that acting would require real work on his part. Passing would require more than watching others act.

Dean gave him a monologue from You’re a Good Man Charlie Brown from the scene of Snoopy’s fight with the Red Baron and instructed Delate to perform it the following week or not return to class. “I went and memorized it and I was terrified,” he said.

But his delivery of that monologue became a turning point. Inadvertently drawing on personal experience, he’d simulated the turn of a helicopter machine gun to portray Snoopy’s machine gun on top of the doghouse. For that moment, he might have been in Vietnam again, but he dismissed it.

By fall of 1972 Delate had landed a role in a melodrama directed by professor Stephen Stearns. Though afraid once again he said, “It was the kind of fear where you think: ‘I think I need to walk into this one.’”

Delate filled his remaining semester at Bucks with theater classes and was accepted at Syracuse. He’d planned to transfer there when he learned about a professional theater company at none other than Rider University where years before he couldn’t muster grades needed for deferment.

He applied and was accepted into the Rider program excited by the prospect. After graduating Bucks in 1973, Delate went on to earn a Bachelor’s degree at Rider and was selected for an internship at the McCarter Theater at Princeton University.

“Bucks was the best thing that happened to me as far as making a transition from the war and into the world. The teachers I had were terrific,” Delate said.

After college, Delate moved to New York City where he tended bar for a couple years but began to struggle with his memories of war. With the help of a therapist, he began to process his Vietnam experience.

He has performed in theater, on television and in film. By 1984, Delate was performing amidst an ensemble of eight Vietnam veterans in the award winning Tracers, a play about the war. One performance stands out in his mind. Then Massachusetts Senator John Kerry had brought a U.N. delegation of North Vietnamese people to see the performance. (Diplomatic relations were not reestablished with Vietnam until 1995 by the Clinton administration.) From the stage, Delate said, “We couldn’t see them but you could feel it. We knew something was in the air that night but we didn’t know what it was.”

At intermission, the house manager informed the cast about the Vietnamese delegation and asked if they would be willing to meet the Americans after the show. “It turns out that most of them had been soldiers when we were soldiers. On our way to the dressing rooms, we were in a big hallway. (In my memory now of course, it’s like slow motion.) We all walked towards each other and just spontaneously everybody embraced. There was a vibe of forgiveness that I’ll never forget.”

“There’s nothing better than being in something that has social relevance and that has an impact. With that show, we did extensive interviews with news journalists and 20/20. That’s where I first met Harvey Keitel and Robert De Niro,” Delate said.

Keitel got him into the Actor’s Studio in New York. Little did Delate imagine that he’d go on to work with De Niro in the 1989 film Jackknife.

In the decades since, Delate recalls returning once to Bucks County Community College in ’86 or ’87 when it brought back director David Dean and other actor-alumni to perform Sam Shepard’s True West in the Orangery. “That was a blast,” he said.

Delate has appeared in numerous theatrical, television and movie performances including: sharing the stage with Al Pacino in the tragedy Salome by Oscar Wilde and playing Mitch in Tennessee Williams’ Streetcar Named Desire, episodes of Law & Order and HBO’s season 2 of The Comeback, in addition to The Shawshank Redemption and The Truman Show. Although much of his work as Truman’s father landed on the cutting room floor in the latter, it remains one of his favorite roles to have played.

During his sophomore year at Bucks, Delate sat in on a rehearsal of a play at Bucks County Playhouse about Harry Truman entitled Give ‘Em Hell Harry starring actor James Whitmore. “Fast forward to 1993. I’m in a van with James Whitmore and we’re going to the set on our way to film The Shawshank Redemption. I said, ‘Mr. Whitmore I saw you rehearsing at Bucks County Playhouse,’ and he lit up like a kid!”

Delate’s current work reflects a lifetime of gathered experiences that include: his Vietnam War service, many occasions when he acted in theater and film where the characters were soldiers, the subject was war or the effects of PTSD, and that monologue in acting class at Bucks.

Memorial Day, a play ten years in the making, which Delate wrote and in which he stars, depicts the story of a Vietnam veteran on the verge of suicide during the Memorial Day holiday. “We’re assembling a documentary about it now,” Delate said.

He’s so appreciative of the support he received from the people from the Actor’s Studio in New York and LA: Ellen Burstyn, Harvey Keitel and Al Pacino as well as the military. “They always said, ‘anything you need to move this thing forward, ask us. We’ll give you the theater and any resources you need.’”

Delate has performed Memorial Day anywhere he could—in New York as well as other places around the country. Four years ago during a stint at an Upper West Side theater, Delate said, “There was a younger veteran who had seen a workshop version of it six months before at the Actor’s Studio on 44th Street. He contacted me and said he was an Afghan vet and he was bringing his friend to the next night to see the show.”

“So, they came to see the show and we chatted for a minute afterwards,” Delate said.

“He called me the next day and he said, ‘You remember my friend you met last night?’

“He said, ‘Well we were only a block away and he said that he had been planning to kill himself for the last two months and that day he went to the VA the next day to ask for help.’”

“That’s where I go: ‘Wow!’ This thing I’m doing is more than just entertainment.”

Delate’s play serves to help veterans and their family members and friends to better understand what veterans go through having been in combat. Memorial Day addresses the effects of PTSD. Not bad for a guy who wasn’t considered “college material.”