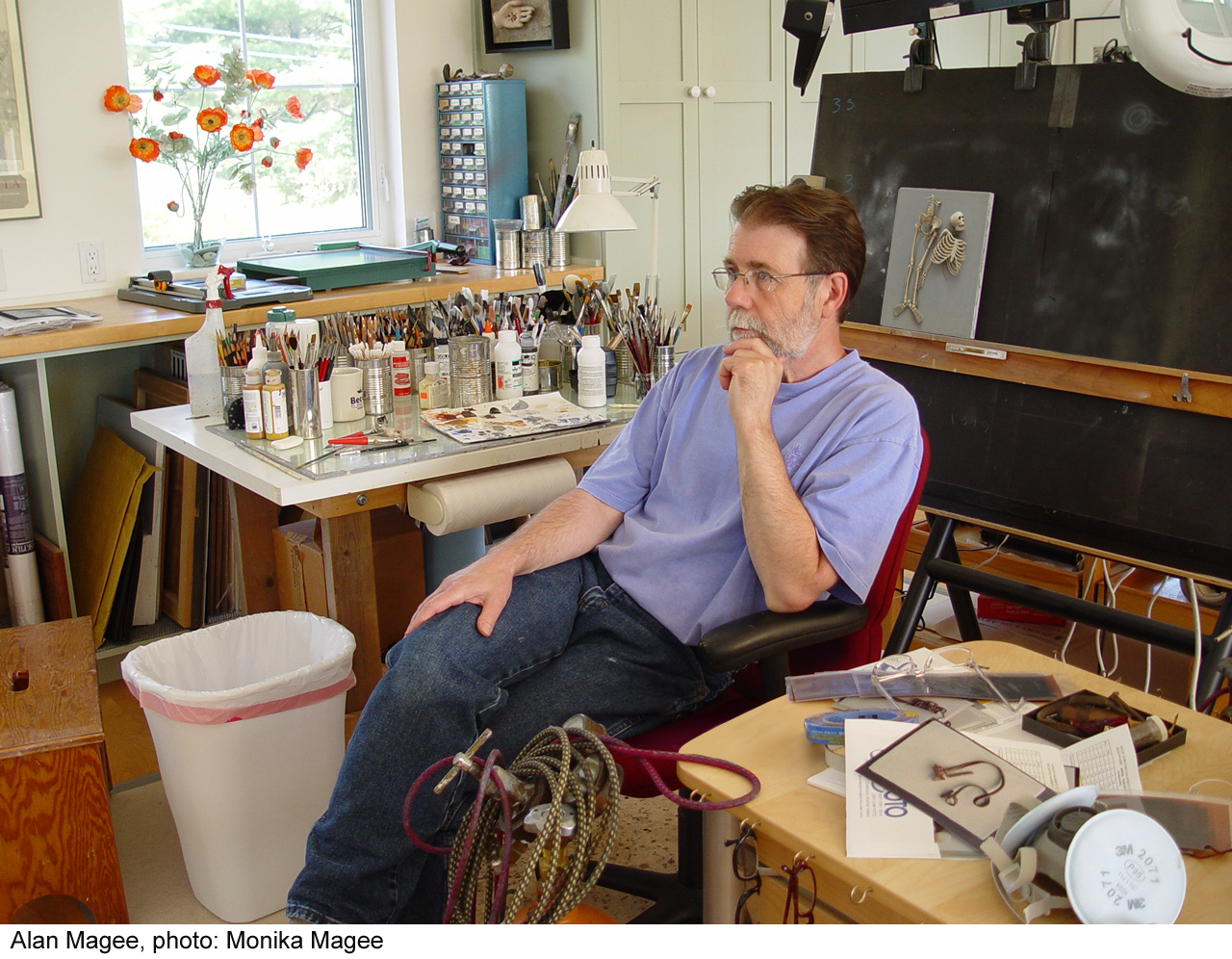 Renowned artist Alan Magee said he believed he grew up with an egalitarian spirit, but really didn’t understand what that meant until he took Walter Alvey’s Western Civilization class at newly established Bucks County Community College. This course, he claimed, “changed me forever” as he learned about the realities behind progressive movements and what it really means to work toward equality for all people.

About a decade later, after graduating from Bucks and after working as an illustrator for book and magazine publishers, Magee launched his own artistic career and soon began to incorporate social commentary into his artwork, creating pieces that press viewers to pay attention to what is happening in the world. He credits that 1966 Western Civ class with his initial “political education” and views it as the roots of his art’s focus on what it means to live and work responsibly.

Magee, who was born and raised in Newtown, said his mother, Rena Cook Magee, always supported his artistic endeavors, making sure he had supplies and keeping everything he drew. “She was an extremely talented artist herself, but never worked as a professional artist,” Magee noted.

He also drolly pointed out, “As an aspiring artist, you could do worse than to grow up in Bucks County.” While appreciative of many New Hope landscape artists, he said “[Andrew] Wyeth was a formidable influence on me.”

Yet another major influence on Magee was his Council Rock High School art teacher Isabel Westberg. Not only was she responsible for him going to the Tyler School of Art, but she also drove him to his initial interview. After a semester at the Tyler School, Magee elected to transfer to Bucks County Community College because of its proximity to his home and because he thought it would be exciting to be part of something new.

After graduating from Bucks in the 1967 inaugural class, Magee enrolled in the Philadelphia College of Art (now University of the Arts), where he studied in the Illustration Department. Starting in 1968, while still a student, he began taking on illustration assignments from publications such as Time, the New York Times, the Atlantic, Playboy and New York Magazine as well as book publishers that included Simon & Schuster, Ballantine, Avon and Bantam Books.

In 1969, Magee married Monika Siekmann—also a graduate of Bucks County Community College—and together, they ran a studio, first in Newtown and then in Buckingham. “Monika had always been interested in art and is, among other things, a talented graphic designer. She would help with the photography and the organization of illustration projects,” said Magee. “Monika is also an accomplished community leader. Among her many achievements was spearheading a regional recycling program in Maine in 1990, and leading several partnering towns in making significant environmental and economic progress.”

Magee’s illustrations received numerous awards, including a National Book Award in 1982, Awards of Excellence from Communication Arts magazine and from the Society of Illustrators, Playboy magazine’s Annual Editorial Award, and awards from the Art Directors Clubs of Los Angeles, Chicago and New York.

During his career as an illustrator, Magee produced paintings for the covers of books by a number of notable authors such as Saul Bellow, Bernard Malamud, John Irving, Henry Miller, Agatha Christie and Graham Greene. “Greene’s books began inspiring me to move on and build a life of my own as a visual artist,” Magee offered.

So in 1976, he and Monika moved to Camden, Maine. Magee said about the relocation, “Maine was a good antidote to the intensity of the New York illustration world.”

Magee perceived mid-coast Maine’s Pemaquid Beach as “a turmoil in slow motion—the action of water moving stones over and against each other to create these incredible sculptural forms.” He felt the stones welcoming him. “When a new image or a new symbol appears in your life, it’s impossible to ask why. When something hits you with such a walloping force, then you realize you have to attend to it.”

His realistic paintings and tapestries of beach stones and artist’s tools reveal his keen observation. While his black-and-white monotypes and war toys are created with an equally sharp eye, they present a darker side of society. “My work can be divided into two parts,” Magee said. “One part invites contemplation of the natural world; the other responds to the troubling aspects of human behavior.”

In a clip from a soon-to-be-released documentary about his life and art, Magee noted, “When I’m working on the monotypes or on the war toys, I’m finding that it’s just instinctive to come out with something where the pathos is there, where the injury is there, where the suffering can be made clear, but at the same time, it isn’t a moment of shrieking anguish.”

He continued, “What I want is something that has the lasting qualities of an altarpiece that you can go back to repeated times and find a solace in it and certainly an open door to the things that are dark and distressing, but that don’t take away any possibility of hope.”

Even Magee’s advice to young artists is hopeful and encouraging: “Push into areas that are your own and try to be independent of art world trends. Move toward the ideas and imagery that generate energy and excitement—that will be your territory. And don’t be reticent to reach out to artists in any field whose work you admire. Some will respond and offer both help and friendship. Don’t worry about those who don’t.”

It makes sense that Magee developed an artistic collaboration with Barry Lopez, an American writer whose work is known for its humanitarian and environmental concerns. Lopez’s book Resistance (2004) includes monotypes by Magee.

Magee’s first solo exhibition occurred in New York City at Staempfli Gallery in 1980, and since then, he has had frequent one-person shows in the United States and Europe. In 2003, his retrospective exhibition Alan Magee: Paintings, Sculpture, Graphics opened at the James A. Michener Art Museum in Doylestown before moving around the country to three other museums through 2005.

Magee’s artwork is in the collection of the Fine Arts Museums in San Francisco, the Museum of Fine Arts in Boston, the Art Institute of Chicago, the Portland Museum of Art, and the U.S. Capitol Building. Private collections of his work include those of Mobil Oil, the Atlantic Richfield Co., Lucasfilm Inc., Cargill Corporation, the Bank of Japan, the Union Trust Bank and The Janss Collection as well as those of celebrities such as Billy Wilder, Henry Fonda, Johnny Carson, Mike Nichols and Diane Sawyer, Nicolas Cage and Morley Safer.

Magee has also been interviewed in various broadcast media such as the Voice of America, Monitor Radio in New York, WHYY in Philadelphia, Pacifica Radio in San Francisco, and was featured in Graphis magazine. And he has been the subject of television documentaries, including Alan Magee, Visions of Darkness and Lightand Alan Magee, Maine Master.The most recent documentary about Magee is just wrapping up after two years of production.

Magee’s artwork has earned him numerous awards and accolades from cultural institutions such as the American Academy and Institute of Arts and Letters, and the National Academy of Design. He appreciates all the acknowledgements, saying, “It’s hard to single out one as being more important than another. It is encouraging when any artist or organization recognizes your work—it doesn’t matter where it comes from.”

For many years, the Magees returned to Bucks County to visit and to care for family. When asked what he misses about the county, he voiced without hesitation and a quick chuckle, “Everything—from hoagies to the Michener Museum.”

Magee returned to Bucks County Community College during its 20-year anniversary and received an alumni award from Dr. Charles E. Rollins, the college’s president at the time. The artist also displayed several of his black-and-white monotypes during the 50th Anniversary Celebration of Bucks in 2015.

Christina McGinley, Manager of Alumni & Corporate Relations at Bucks said, “Working at the college, we see firsthand the amazing things our students are capable of. Whatever their course of study, they are gritty and innovative; we are proud to see them move on and accomplish great things. Hearing stories like Alan’s is a glimpse into the heart and soul of the college. Our alumni definitely enrich the identity of Bucks.”