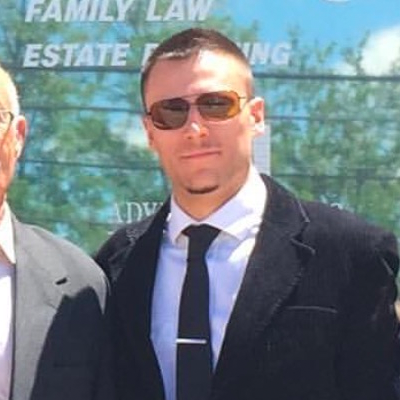 “I was the first person in my family to go to college, so I didn’t really have any outside influence about what direction I should take. From the start I wasn’t really sure what I wanted to do,” alumnus Ed Barbetto said.

Born and raised in Connecticut, Barbetto moved to Pennsylvania in 2001 while in the sixth grade. His family settled in Bucks County where he went on to attend school and graduate in the New Hope-Solebury school district.

“When I was 17, I began working as a valet on the weekends and found out that I was really good at it. I liked working with people and I loved my job. I had grown up in a ‘car’ town, loving cars and I knew I’d be doing something in the automotive industry, so I figured, ‘How can I apply some sort of business and customer service aspect to the automotive industry which I’m passionate about?’”

After high school, Barbetto enrolled at Bucks as a business administration major because he figured it would give him many possible options until he could decide on a specific career. He earned an associate degree, graduating in 2012. “Once I got into it, I ended up switching to a marketing major and went to Temple. Because of the affiliation Bucks has with them, the majority of my classes transferred.”

At 18, Barbetto thought about one day owning a valet company, but he said, “Bucks helped me to explore what options are available—what classes would help me.”

He enjoyed the flexibility and convenience that the number of possible class times offered because it allowed him to work while attending school. With work, Barbetto was able to take three or four classes each semester, so it took three years to complete his degree. “I really liked that the environment allowed me to pick my own path.”

Barbetto recalls being part of a career development group that met in the afternoons after class. “Everybody just gathered and talked openly with one of the marketing professors about which direction we wanted to go and that was actually really beneficial; just being around other people my age that were looking for other opportunities.”

Programs such as that one, he believes, help students to determine their own direction. “A lot of people at that age think they know what they want to do, but they don’t know how to get there.”

Barbetto’s hard work as the sole valet for a busy restaurant caught the eye of Paul Denish, owner of World Class Parking, a valet service and parking lot management business located right across the street. That owner approached and offered him a job and introduced him to new clients. There Barbetto set up weekend work and made sure there was staff to cover. At the same time, he’d scrabbled additional work from another valet company.

By that time, Barbetto had been a valet for about 4 years, but a solid, full-time job offer in another field sidetracked him. About six months later, he received a call asking him to come back as the full-time operations manager of World Class Parking, an offer he accepted.

During his new tenure, the company posted its best two years in its 24-year existence and in May 2017, when Denish was looking to leave the business, Barbetto purchased the company.

Barbetto reflected on his path to World Class Parking. “My dad always told me whatever I do, do it right—whatever it is. I’ve always lived by that. Parking all these cars exactly perfect, making sure I was dealing with customers, listening what they had to say, addressing their needs, being on top of everything. I did that every day. I was just about to give up on doing the valet thing, when I got that phone call.”

He believes he was prepared to recognize and seize the opportunity because of his work ethic and experience at Bucks and Temple. “Even when I took the job, I didn’t know I’d get the opportunity to become the owner. The key is not missing or acting on that opportunity or that potential. You always need to be ready for it.”