For 10 years, the Epstein Campus at Lower Bucks has hosted the forums as part of its mission to inform and educate students and citizens alike 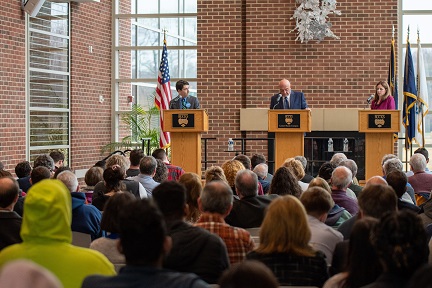 Bucks County Community College hosted a debate between the Democratic candidates for Congress in the first congressional district on Tuesday, February 25, at the Gene and Marlene Epstein Campus at Lower Bucks in Bristol.

“This is our tenth year holding political debates at the college and on this campus,” said Associate Provost Dr. Kelly Kelleway. “We feel that political discourse in this type of forum is not only educational, but a vital part of the democratic process.”

The debate, which featured candidates Skylar Hurwitz and Christina Finello, was moderated by Social & Behavioral Science Faculty Member William Pezza. The college has invited the Republican candidates to debate before the April 28 Pennsylvania primary.