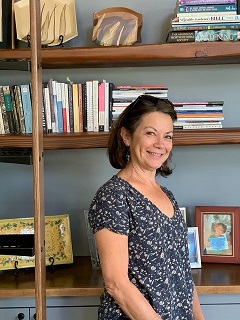 Jerome, a retired educator who began writing poetry as a teenager, rose to the top of 90 entries in the 43rd annual contest, said Dr. Ethel Rackin, director of the poet laureate program administered by the college. The contest is sponsored by the Bucks County Commissioners.

Jerome said she’s honored and humbled to have won such a prestigious competition. Like many poets, she describes her creative process as one that’s constantly in motion.

“I am constantly writing, making notes and observations, and reading,” she noted. “The power and beauty of words can literarily take my breath away, or as Emily Dickinson described poetry, I can feel physically as if the top of my head were taken off.”

Jerome was honored with a poetry reading and reception November 17 at Bucks’ Newtown campus, Rackin added. She also receives a proclamation from the County of Bucks and a $500 honorarium.

Jerome’s poems and stories have been published in The Stillwater Review, River Heron Review, Schuykill Valley Journal, US1 Worksheets, Little Patuxent Review, Short Story, and Center magazines. The inaugural winner of Doylestown’s Main St. Voices poetry competition in 2015, she has been nominated for a Pushcart Prize and Best of the Net award. She is currently working on a collection of poems.

She holds an MFA from Vermont College of Fine Arts and has written for the New York Times, Scholastic Publications, and numerous other magazines. A former high school English teacher and associate professor of writing at regional colleges, Jerome, along with her husband and two daughters, lived in Rotterdam, Tokyo, and Blairstown, New Jersey, before settling in New Hope nearly a decade ago.

Two judges blindly selected the winner and runners-up. The preliminary judge, who narrowed the entries down to a few dozen for the final judge, was Chad Frame, a former Montgomery County Poet Laureate whose work was featured in The Poet and the Poem from the Library of Congress Seriesand in many journals. The final judge was Melissa Stein, author of the poetry collections Terrible Blooms (Copper Canyon Press, 2018) and Rough Honey, winner of the 2010 APR/Honickman First Book Prize.

The judges also named three runners-up in the contest: Tricia Crawford Coscia of Morrisville, Lynda Gene Rymond of Quakertown, and Melinda Rizzo of Quakertown. They were also invited to read at the reception, along with 2018 Bucks County Poet Laureate Carly Volpe and preliminary judge Chad Frame.

The Bucks County Poet Laureate program – the longest-running such program in Pennsylvania – is another way that Bucks County Community College contributes to the cultural heritage of the region. For more information, contact program director Dr. Ethel Rackin at 215-497-8719.