Alesandra ‘Sasha’ Temerte, who rose to the top of 127 entries, was honoreed with a May 18 reading and reception at Bucks County Community College

Alesandra “Sasha” Temerte, a senior at Central Bucks High School East, has been named the 2019 Bucks County High School Poet of the Year, officials at Bucks County Community College announced. The 18-year-old Jamison resident rose to the top of more than 100 entries in the 32nd annual contest, part of the Bucks County Poet Laureate Program administered by the college. 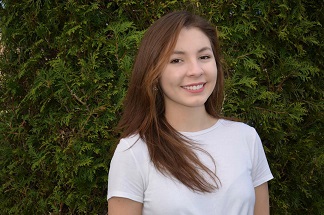 Temerte, who had placed third runner-up in 2018, won a $300 prize and was honored at a poetry reading and reception May 18 on the college’s Newtown campus. She was joined by runners-up and finalists in the contest in a celebration of young poets from across Bucks County. Those attending the free event received an anthology containing the winning poems and a poem from each entrant, Writes of Passage Vol. 9.

As in past years, the number and quality of entries made the judges’ task challenging, noted Professor Ethel Rackin, director of the Poet Laureate Program.

“We had 127 entries this year, which made the judging difficult,” said Rackin, noting that the judges named a tie for first runners-up. “Overall, the work we received was thoughtful, and many of this year's poems were concerned with history, as well as the here and now.”

Volpe said she was astounded by Temerte’s talent.

“I believe this poet was born a firecracker. Or at very least, a poet,” Volpe wrote, referring to the opening of one of the winning poems. “The line breaks are intuitive. When read out loud, the spacing makes sense. This is incredibly important when writing and reading poetry – especially if you want to be sure that it is just as powerful as you intended and can also translate your message in someone else’s hands. It has.” 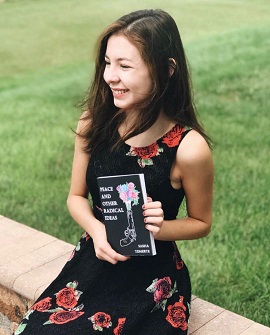 Temerte, who has already published her debut poetry book, Peace and Other Radical Ideas, says she’s been writing as long as she can remember, but only shifted to poetry in ninth grade after she discovered slam poetry.  She says the genre has since provided her with a catharsis for emotions, a platform for creative expression within a supportive community, and allowed her to connect with others on a more meaningful level.

“To me, words in a sentence are more than beads I string together with a pen. They’re vehicles for stories that elicit powerful emotions, raise awareness, inspire generations, and save lives,” said Temerte. “As such, the topics I gravitate towards most in my poetry are love, mental health, and politics/social issues.”

Following graduation from C.B. East, Temerte plans to attain a mathematics degree with a double major in either business, writing, or philosophy, with a goal to work as an actuary and earn an MBA.

“In essence, the plan is to be a leader by day and a poet by night,” she added. “As cliché as it sounds, I hope that through writing and leadership, I’ll successfully make a large-scale difference.”

The 2019 Bucks County High School Poet of the Year reading and reception take place from 1 to 3 p.m. Saturday, May 18, in the Orangery building on campus at 275 Swamp Rd., Newtown, Pa. Admission and parking are free.

The 32nd annual Bucks County High School Poet of the Year contest is another way that Bucks County Community College contributes to the cultural heritage of the region. To learn more, visit www.bucks.edu/poets  or call the Language and Literature Department at 215-968-8150.

One of the winning poems submitted by Alesandra “Sasha” Temerte:

// a poem about heartbreak or climate change //

You were born a firecracker,

and smoke that smothered

your mother when you spoke.

You burned every building

you stepped foot in

without ever lighting a match.

You were born a graveyard,

the wings of birds,

just the tips of your toes

But the birds' wings

You were born a paper cutter,

slicing lips with your tongue,

You knew how to destroy.

And I wish I could say

you destroyed everyone but me.

You were born a construction machine,

tearing everything to pieces

that when the earth

is nothing but gravel and dirt,

you will build something new.

you didn't have much attention.

You were born a black hole

you were born to burn,

you're taking me with you.