The Commonwealth of Pennsylvania’s State Board of Nursing has granted Bucks County Community College’s Associate Degree Nursing program full approval status after graduates of the program achieved a 93.33% pass rate on the NCLEX state licensing exams. 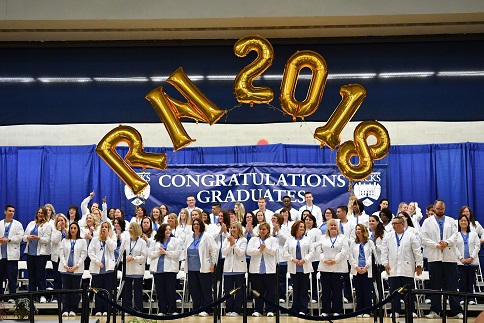 The program remains on the board’s Approved List of professional nursing programs, according to Dr. Sue Petula, the board’s nursing education advisor.

Dr. Constance Corrigan, dean of the college’s Health Sciences Department, said when it saw students struggling to pass the NCLEX, the department instituted changes, such as stronger requirements for grades in science prerequisite courses, and an overall increase in GPA for admission.

“Although those changes were instituted early, we also added a requirement that students must pass a predictor test before they graduate and take the NCLEX exam,” said Corrigan. “But more importantly, the students, with the encouragement of the faculty, took their preparations seriously. They really worked hard and the outcome was even better than we had hoped for.”

What’s more, Corrigan says that Bucks nursing graduates scored among the highest pass rates in the state for the nursing licensure exam in 2018. Bucks’ 93.33% NCLEX pass rate is above the state average of 92.84% and higher than the national average of 87.56%. It was higher than neighboring programs at Lehigh Carbon Community College (86.86%), Delaware County Community College (83.23%), Gwynedd Mercy University (88.73%), and Jefferson College of Nursing (89.86%), to name a few.